Thursday dawned with a sense of anticipation in the air – it’s Showcase Day!

Students spent the morning refining and improving the quality work that they were going to display.  The Sports Hall was set up as the main venue for the Showcase and the ‘A Pizza Action’ crew set up their pizza ovens and had a trial run – ready for the lunchtime rush!

The sporting leaders group were all set up for the Primary School Sports festival – unfortunately the primary students couldn’t make it but the Euro 16 students stepped in and were put through their paces because of the excellent organisation and planning of the Sports Leaders.

The Showcase doors opened after lunch and the food orientated groups were immediately inundated with students after a flavour of their wares.  The pizza crew were non stop providing sweet and savoury pizzas from their homemade terracotta pot pizza ovens.  The Wet ‘n’ Wild’s homemade ice-cream was a real treat and the LLoB Bake-Off group had nothing but crumbs to show for their tasty goods by the end of the afternoon.

Up Funk Junk, Green Fingers and the Bombs Away stalls had a massive range of homemade treats and goodies for students to snap up at great prices – all their proceeds going to the Save the Children refugee charity.  Our Cultural Capital students had produced marvellous diaries and scrapbooks outlining their experiences during two days in London.

Bike it Birtley had their new web pages to show us based on their bike routes of the week and the Heroes of Birtley displayed excellent work based on the knowledge they had developed over the week.  The Birtley Heritage group returned to admire the reconstructions of Elisabethville, the Heroes book and other poppy inspired work.  The All-A-Board students had a fantastic range of over-sized games for us to play: crazy golf, bar skittles, jenga, draughts and dominoes.

Our Science Buskers entertained and were very knowledgeable of their science experiments with some problem solving and reasoning skills definitely demonstrated. The Magical Mindfulness group displayed some creative and beautiful mandalas, Tibet prayer flags and collages of their work and learning over the week.

Walk Like an Egyptian had prepared work from canopic jars to Egyptian outfits, jewellery to tombs!  The School of the Dead zombie was a massive success entertaining students on the big screen, extra showings had to be scheduled into the afternoon!  The Atrium was busy with a constant flow of students, staff, governors and visitors sampling the very tasty afternoon tea.  Around in the Performing Arts studio students were presenting their audition show reels – there is a fantastic amount of talent in these students – some were really pushed out of their comfort zones but still produced some excellent work.  The ‘Dracula’ group performed their production to a small and invited audience and had a filmed version to share as well.  The props they had made added to the atmosphere they created.

The LLoB presents…. students prepared excellent mood boards and art work based on the musical “Our House” making the reception area look like a national art museum – inspiring work!  Around the Academy, the Escape team had set up 3 classrooms full of puzzles and logic games that volunteers had to try and follow in a time limit in order to exit freely from the room – not all students were successful – although we did let them home at the end of the day!

The Euro 2016 students had an excellent end to their day with a Skype interview and tour around the Euro 2016 BBC sports studios in Paris from producer Jamie Gavin – what an opportunity!

Finally, with the #thisgirlcan students on their way back from their adventures tomorrow we look forward to seeing their own #thisgirlcan posters that will be on display in the PE department.

Overall, 750 Key Stage 3 students engaged in 22 Creativity projects.  The creative work and learning that was demonstrated all week epitomised our learning behaviours of resilience, responsibility, reflection, reasoning, resourcefulness and respect.  It was a pleasure and a proud moment to see the fantastic work that the students showcased – well done Lord Lawson.

In the process of their creativity, our students were able to consider others and have raised a grand total of £553.00 for the Save the Children’s child refugee campaign – another amazing feat of the week. 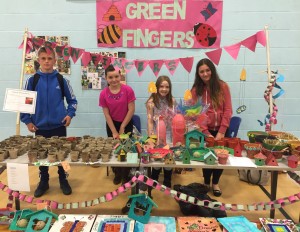