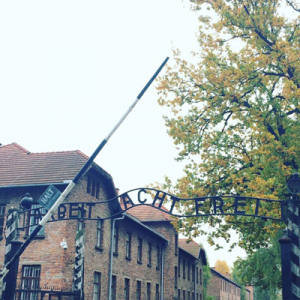 It has been around three months since we went to visit Auschwitz, which has been time that we felt we needed in order to properly process what we experienced. In the last post we asked you all to think of the victims of the holocaust as the individuals they were, and we would ask that you continue to do so throughout this blog post detailing our visit to Auschwitz, just as we did when we went ourselves.

END_OF_DOCUMENT_TOKEN_TO_BE_REPLACED

sh people have existed for thousands of years, with a rich and vibrant culture, but two thousand years ago they were defeated by the Romans and sent into exile. This began a devastating trend throughout history in which they have been the targets of persecution, yet their distinctive culture remains prominent world-wide. For us, it was the stories of the survivors that conceptualised Jewish life before the Holocaust. Hearing holocaust survivor Zigi Shipper’s testimony regarding his journey from life in Poland with his family to life in Auschwitz highlighted how the Jews, as well as the other victims of the holocaust, were stripped of their identity and culture almost instantly.

END_OF_DOCUMENT_TOKEN_TO_BE_REPLACED

Today, January 27th, is the 71st anniversary of the liberation of Auschwitz II-Birkenau and so it also marks Holocaust Memorial Day. The theme for which is ‘Don’t Stand By’ this year. As part of our Lessons from Auschwitz project, our next steps will be to commemorate this day with a series of blog posts regarding pre-war Jewish life to give a human context to the holocaust, and our own feelings and experiences from when we visited Auschwitz.